Carto is a puzzle game where you have to manipulate an overworld map that’s divided into square tiles in order to make new paths to explore new areas and complete tasks. Sometimes you will be run out of tiles to build a desired overworld map and have to find new ones. To gain a new tile you can either: 1) collect a paper-shape object on the ground when you are in an explore mode, 2) manipulate an overworld map to have a required shape and make a (hidden) tile pop up. The first method is pretty straightforward with (maybe too many) tutorial on it already. But the second one is not, the game didn’t teach you that this method exists AT ALL. 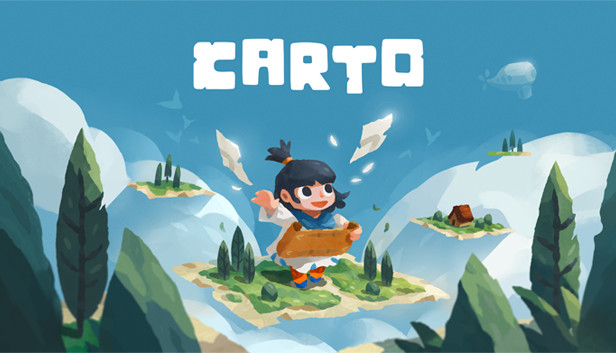 The first time that the player have to find a new piece in the second method, is that the game ask the player to find a hidden spot in a center of “4 flower tiles”. At this point it is naturally for players to arrange those flower tiles into 2x2 square in the overworld map and then walk into the center to check for the hidden spot. Nothing happen. After that players might spend lots of time trying to rotate/rearrange tiles in this fashion, hopefully to find a correct solution. Just to find that the 2x2 square is totally wrong, but the correct solution is to arrange them into a plus sign (+) with a hole in the middle, just then the hidden tile pop up!

So my question is, why the game doesn’t introduce this method before? It doesn’t have to be a full tutorial, just a smart little puzzle design that make players feel like they solve the puzzle themselves (like using just 2 tiles to make another one), not by throwing an impossible puzzle (according to player’s point of view) and left them to look up at a walkthrough if they can’t solve it. (And don’t forget that the arrangement of 2x2 will solve some quests without finding new tiles too.)

This is not a Eureka moment for a puzzle game, but a frustration with curses and willing to give up. And I think this is a critically poor designed puzzle that rendering the game unplayable. Hence a thumb down.