Manifold Garden is a 1st person exploring / puzzle solving game (similar to Portal) that let you manipulate the direction of gravity that affect you, e.g., in a room you may think you stand on a floor but once you touch a wall you’ll stand on it and the previous floor will become a wall instead. Besides, the world in the game is not only feature a 4D space (like Antichamber), but also bend the space around you such that it became a loop, a torus. So when you walk off a cliff to let yourself fall down for some time you’ll find yourself land on the cliff you walked off. These concepts (they called it Escher-esque style) are fascinating, and the game done it right, despite being linear, for the whole main quest. 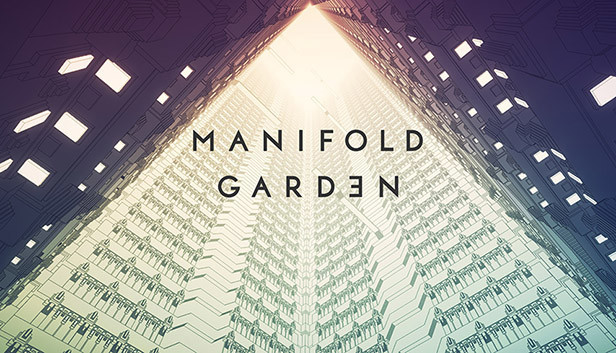 However, the game can also be played in a non-linear manner (with branching paths, backtracking, sequence-breaking, all those cool stuff from metroidvania genre). This sounds alluring on top of the already captivating world design. Sadly, the game failed to executing this part right.

First of all, there is no map! I know that the world in this game is weird enough it can not be illustrated on a normal 2D canvas (or even 3D) like many games. But it doesn’t have to be a full detailed map that try to transcribe the whole world. It can be just a graph that capture a preview of each room, and show which room is connect to which (like Fez’s map). That way we can keep track of where we are, is this room contains any point of my interest (like Hollow Knight’s map pin), and how to go from here to any other room in this mind blowing complex world.

Now, what is more intriguing? Seeing an achievement you haven’t unlock despite you finish the main quest, or open up a map (which this game didn’t provided) to see that the world are still full of locked doors?

The third disappointment point is that it so tedious to start the secret path. Since the player need an object (called “dark cube”) that if they were playing the game regularly, they have to destroy it somehow along the way. So no backtracking available here. The player have to start the whole game from scratch and have to repeat the very first (now became) easy (but tedious) puzzles for about half an hour! HALF AN HOUR!!! Not to mention that the entrance to this secret path is not obvious at all because it is hidden behind a dark wall. But the game teach the player at very late state of the game that in order to bypass this dark wall they need a dark cube. Take that the game provide no map, who would have remember these subtle lessons?

Finally, is the community. Since this game is so niche it attract not so many people. And the small group of people who solved the puzzle think they are so smart they don’t wanna give away the solution easily. Go ahead and look at a walkthrough of this game on Steam, you’ll find a digital muscle flex instead. Search YouTube for a walkthrough you’ll find a 3hrs long video with no commentary or edit out the obvious boring part. Oh… that’s smell.

I wanna have a good time playing this game. And I wanna persuade my friends (who are not into puzzles) to try it out too. But now I’m very reluctant to suggest it to anyone (even though they like puzzle). Imagine that my friend stuck somewhere, they can’t find a good community walkthrough out there. So they might ask me for help, but how? They might chat me “hey dude, how to solve this double-side tree puzzle?” But there are a lot of levels with double-side tree, and after finishing the game myself a week or two I might forget about the detail of each puzzle already. The screenshot they send won’t help me recalled much. Do I need to luanch the game and wander around blindingly just to find the room in need? That not spell fun at all.

However, if the game were to have a map, my friend can ping me and say “I’m stuck at level 2-3”, and now we all know where to look. Wheck, my friend might not need to call me at all, since they can easily google for the solution from the community! So all of my point here seems to originate from the no map design, and it is so fatal. Hence, an undoubtedly thumb down.